The 51/2 day PTS program is exhilarating and exhausting. You most likely have never gone through anything like it before.  You came face to face with uncut raw emotion. All of your previously troubling and confusing experiences, memories and feelings had their chance to escape. The cohort provided the safe container where you could finally put down your load. You were surprised by some of the things you were packing. They slipped out of your subconscious into your awareness like the genie let out of the lamp after hundreds of years. Your baggage mingled with the baggage of all your comrades in the cohort. It was like everyone’s  baggage got  piled up on the runway before it got loaded onto the plane that was taking you all to new vistas. But then you realized you didn’t want to bring it with you.

Just when you thought you had finally regained some control, another wave crashed over you and there were more memories and more pain presented to you. 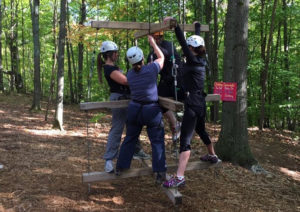 You had the chance to listen to other people’s stories. It was made very clear to you that this was not a contest, but some of the other stories were even more astounding than yours. Suddenly you knew that you were no longer alone. There were other travelers on this road of human suffering. You had friends you could trust because they too knew. It felt good.

You learned to get back in touch with some old parts of you. You found out some new things about you. Some parts you like. Some parts you don’t. You were shown that deep down, your pilot light was still on. You were helped to find it. For 5 1/2 days, you started to fan it. There were stirrings of what was left of some old embers. Some new, tentative small flames started. You were surprised that you could fan the flames of your fellow travelers just a bit. That too felt good.

You were told that the PTS cohort was just the beginning. While you were on the project, all your problems were back home doing push-ups in your closet. Getting stronger. Waiting to challenge you in a new way when you got home, as if to say “so you think you’ve got it all figured out now, right big boy?” You were told that your life would not be better when you get home, it would be harder. During the cohort you were painfully squeezed through a keyhole. It was like you went through a portal into a new world. The new world had enticing new sounds, sights and smells. It promised new adventures. But you soon found out that as enchanting as this new works was, you had no map. You really had no clue where you were. It is scary. Your travelling buddies are now far away. You can connect, long distance, but because they are not right there to check out the landscape with you, they can’t help as much. In this new world, you meet the same old people in your life, but everything is a little different. You have a new lens. You look at them a little differently. They look at you differently now too because you travelled away. They think you went to the promised land and they expect you to be different. But are you really? How does the 51/2 days change you? How does it change your life?

You weren’t given the exact map of your new world, but you were given the cartographer’s tools. You were given a compass. More accurately, you were shown your own compass. The true north of your soul.

Now it is up to you and your soul to forge ahead. So what are you supposed to do?

Oh yeah, Meditation. You were introduced to that. You remember thinking “OK now this is lame” at the beginning. You had heard about it before. It’s the weird thing that skinny shriveled up men with beards in India do. You have nothing to do with that scene. But you played the silly game and participated in the meditation. It seemed sort of okay because everyone else was doing it, and some of them were way tougher than you.

Suddenly, wow! You were unprepared for the release. There was suddenly a little unfamiliar feeling of peace. And hope. But it was elusive. Like a chest of riches in a dream, but when you woke up it was gone.

You are back home. You have your mementos. But you have so much more.

You did the beginner’s course in meditation. Now keep going. Meditation leads you to your soul. The true nature of your soul is to be at peace.

So fear not, friend. You are more than enough. You have everything you need to find your way. Lean in, do the work. Explore the new world view with the new lens. Construct your own map of this new world.

The true gift of following your dreams is who you become in the process. As Joseph Campbell says in “the Art of Living” the privilege of a lifetime is being who you are”.